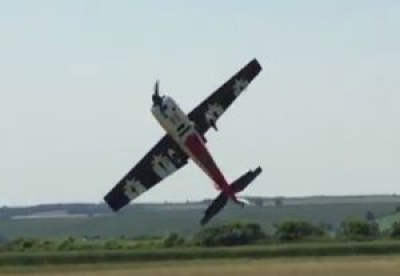 He flew the Extreme Flight 104" Extra which is a legendary airframe in freestyle aerobatics. It is powered by the DA-120 with MTW Re2 tuned pipes and using a Falcon 27x11 prop. It has MKS HBL380 servos all around. Special thanks go to Probuild for assembling the airframe and allowing Jase to fly it during the show.  Before returning to the USA Jase visited Wimborne MAC on the following Tuesday and did an impromptu flight demo with Probuilt aircraft.  Video by Wimborne MAC member Rick Churchill.

Video recorded at Wimborne MAC by Rick Churchill on the following Tuesday after Weston Park before Jase returns to  Michigan, USA.