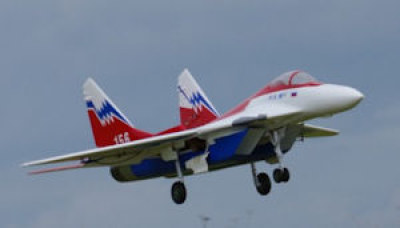 Picked the model up from club member Mark Vandervelden late last year. He decided he wasn’t going to get round to putting it together .  Although being similar to my F15 it was thought to be an easier airframe to handle due to a wider track undercarriage, ailerons and flaps which I don’t have on the F15.  Mark did the install of fuel and air lines and also installed the fuel tanks and some fuselage mounted servos.  I completed the install of all wing and fin mounted servos and surfaces ,extension leads ,power box ,turbine and all related equipment.

The Mikoyan MiG-29  (Fulcrum) is a twin-engine jet fighter aircraft designed in the Soviet Union. Developed by the Mikoyan design bureau as an air superiority fighter during the 1970s, the MiG-29 was developed to counter new U.S. fighters such as the McDonnell Douglas F-15 Eagle and the General Dynamics F-16 Fighting Falcon. The MiG-29 entered service with the Soviet Air Forces in 1982.

The annual Jet Day earlier was postponed due to poor weather conditions and was given the new date...