Less More
02 Dec 2021 19:06 #25421 by Brian Jackson
Replied by Brian Jackson on topic Back to Basics
Until today, I didn't realise that fitting a Merco .61 to a fuselage could be such fun. The last Merco I had was in a model called "Uproar", a design by Chris Olsen, I think I sold the model to David Wedge a couple of years ago, now I wish I'd kept it! After marking and checking the mounting hole positions, I braved the chilly garden outside my shed, and drilled the required holes. Back indoors and thawed out, I popped the Merco between the bearers, and was suitably relieved when all four screws went in without any fuss. Then I decided to alter the position of the fuel intake nipple on the carburettor. "As supplied" it was tilted upwards, no doubt it would have worked alright, but I'm trying to get things as neat as possible. The Merco's carb is a well engineered item, it took a while to figure out which screws to loosen, and which nut released the intake nipple housing. Eventually the penny dropped and the necessary adjustments were made. Earlier today, I checked my stock of assorted strip and sheet balsa, unfortunately I don't have anywhere near enough of anything to be able to complete the Moonglow. I made a list of 1/16" and 3/32" sheet needed, good job I was sitting down as I hadn't realised how expensive balsa has become. I wondered if I could "Crowd Fund" the purchase, then I remembered that our kind and caring Government had given me a heating allowance that would cover the cost. Now it will be woolly hats, long underfugs and lots of jumpers as I turn down the heating and place an order with The Balsa Cabin. Cruel I know, but needs must. 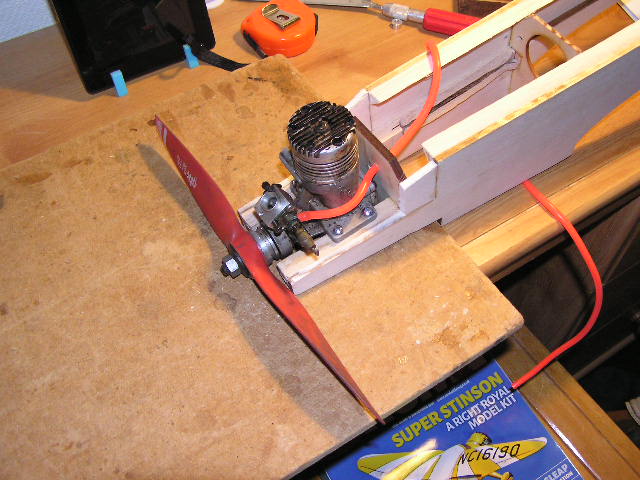